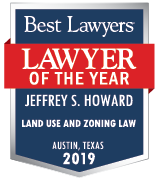 Jeffrey S. Howard (“Jeff”) is one of the founding partners of the firm. He was born in Nacogdoches, Texas, and has practiced law since 1993. Jeff primarily practices in the areas of Real Estate Purchase and Sales, Real Estate Leasing, Real Estate Development, Land Use and Governmental Entitlements, and Easements, License Agreements and Related Land Use Transactions, which includes representation of clients in complex real estate transactions, and in obtaining development approvals for commercial, and residential developments. His practices include representation of clients before the Austin City Council and boards and commissions, and the councils, boards, and commissions of other local governments in the Central Texas region. Jeff is among the active leaders in the real estate industry in Central Texas. He currently serves on the board and is an officer of the Real Estate Council of Austin. He is a member of other trade and professional organizations such as the State Bar of Texas, Austin Bar Association, and Homebuilders Association of Greater Austin. He has been an author/lecturer at numerous continuing legal education seminars.
Mr. Howard’s knowledge and experience have been recognized by his peers, as he was recently named one of the Best Lawyers in the 2022 edition of The Best Lawyers in America® in the area of Land Use & Zoning Law.